Moderate (Can depend on weapon)

Acolytes are various humans with different types of face masks and hoods. They have dark colored pants and have dark armbands. They do not wear anything on their torso. Additionally, some of them appear to have the Rune symbols of the Elder Gods on their bodies, hinting that they may be part of a cult that worships the Elder Gods.

They are hostile melee enemies that behave very similarly to brawlers in the scenarios. Encountered early in the game, they are of an only slight threat as they only try to attack at close quarters. Acolytes do have more health than zombies, and run and attack faster than them so they need to be noticed. Occasionally they will be equipped with a shield, meaning they are slower but can take more hits until the shield breaks. Acolytes can be knocked down, where you can then take their gear.

As ordinary humans, they don't seem to differ much from the standard brawlers in the Scenarios, as they utilize the same attacks and techniques. Because of this, however, they are still capable of initiating rage mode when their health is low. 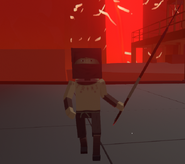 An Acolyte in the game with a spear.

Ally from U.H.D.F (Brought back by Necromancer to kill the player)

The lone Acolyte hidden in Pirate Cove.
Add a photo to this gallery
Retrieved from "https://pttr.fandom.com/wiki/Acolyte?oldid=3544"
Community content is available under CC-BY-SA unless otherwise noted.